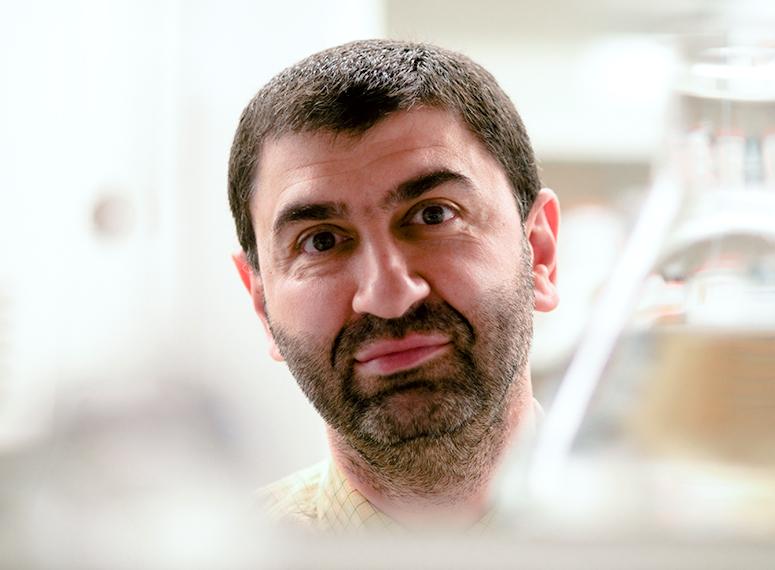 Tigran Chalikian’s research program focuses on the biophysical properties of biological molecules and complexes. He investigates the physico-chemical forces that govern inter- and intramolecular interactions of biopolymers, including proteins and nucleic acids.

Development of new drugs requires an understanding of the molecular forces that stabilize the structure and govern the interactions of the specific biopolymers to which the drug is targeted. In many pathologies, molecular interactions involved in stabilizing the protein and nucleic acid structures and their complexes are altered. These changes may result from genetic mutations that change a protein’s amino acid sequence or from environmental factors, such as changes in pH, temperature, ion concentrations or the presence of other compounds that may influence the binding properties and the distribution of conformational states sampled by the protein. A better understanding of the physical basis of protein folding and misfolding and the interaction of proteins with their ligands, other proteins and/or nucleic acids will lead to the development of more effective strategies for treatment of diseases.

Chalikian works at the interface of physics, chemistry and biology to uncover the biophysical principles governing the interactions of complex biological structures such as proteins and DNA, with the goal of gaining molecular insights into vital cellular events, including folding/misfolding of proteins, enzymatic catalysis, transcription and translation of genes, and DNA replication.

Chalikian’s research has provided novel thermodynamic insights into biomolecular interactions.  His lab has characterized the role of various intra- and intermolecular interactions involved in conformational transitions of a number of proteins and nucleic acids and their complexes, enabling one to differentiate between the norm and pathology ultimately leading to disease. In one example, the Chalikian lab has quantified in thermodynamic terms the electrostatic forces involved in the formation of G-quadruplexes (an alternative biologically relevant DNA structure) for several nucleotide sequences, revealing the molecular mechanisms by which DNA-binding proteins recognize these non-canonical structures.